HELP US GROW OUR CAMPAIGN 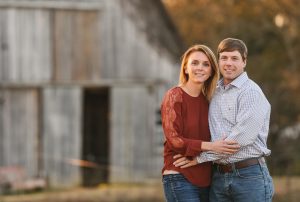 Robert’s roots run deep in Mississippi. Robert, a Christian, farmer and small businessman, runs an Agri-Tourism operation known as Cedar Hill Farm; the farm his grandfather purchased in the 70’s, business his mother started in 1996 and where he grew up. Robert is married to his high school sweetheart, Heather, who lived in Purvis, MS until her family moved to Hernando, MS in 1994. They are the proud parents of two young children (Libby and Hayes) who attend public schools.

After attending DeSoto County Schools and graduating with honors, Robert went on to the University of Mississippi where he studied Business. After he graduated with his B.B.A. in 2005, he returned home to Love, MS to help grow his family business. Through hard work, Robert learned what it takes to run a business, how to create an environment where employees can thrive, and what it means to sign the front of check.

Under Robert’s direction, Cedar Hill Farm has become a successful Agri-Tourism operation reaching over 50,000 customers across the Mid-South and employing more than 100 hard-working people throughout the year. Cedar Hill Farm has been voted the best tourist attraction in DeSoto county along with many other industry recognitions.

With a belief that Mississippi can do better, Robert successfully ran for office in 2015 and served as a State Representative for District 28 for a four year term. For his hard work, he was named as one of the “Top 35 and Under Politicians and Politicos in Mississippi” by the Clarion Ledger. Albeit a rookie legislator, he held top scores by both BIPEC (Business and Industry Political Education Committee) and Americans for Prosperity for his strong business-friendly and limited-government voting record. He was also named a “Champion of Freedom” from AFP in 2016 and 2017. In 2016 & 2017, The American Conservative Union Foundation named Robert as one of the top three Conservative Legislators in Mississippi by awarding him with their “Award for Conservative Excellence” and in 2018 awarded him with their “Award for Conservative Achievement”.

In 2019 he ran for Governor in the Republican primary against the MS political machine with only grassroots support and was told by every politico in Jackson that he wouldn’t make any difference in the election and wouldn’t get more than 3%-5% of the vote.  After spending 9 months of hard work on the campaign trail listening to the concerns of every day Mississippians all over the state, he forced a run off in the primary election by receiving almost 20% of the vote and made national headlines when he was attacked by the Liberal fake news for his “My Truck My Rules” stand.  He stood his ground, won multiple debates, and learned valuable lessons during his time in Jackson as a legislator and his campaign for Governor.

Robert has a heart for serving others. His business hosts an annual fundraiser “Fireworks on the Farm” benefiting the Palmer Home for Children raising over $60,000 for this great Christian-based organization. He is the past president of the Southern Christmas Tree Association and was named 2012 Conservationist of the year by the DeSoto County Soil and Water Conservation District.  He was presented The Spirit of Main Street Award by the Hernando Chamber of Commerce in 2020.

Robert and his wife Heather, along with their two children, are active members of Hernando Baptist Church.